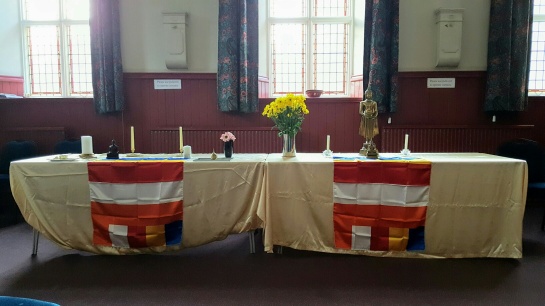 The Deputy Mayor of Kendal Councillor Andy Blackman attended the BGKT Buddhist Group of Kendal (Theravada) Vesak celebrations, at Kendal URC United Reformed Church hall on May 10th 2017. The festival of Vesak commemorates the Birth, Enlightenment and Passing Away of the Buddha.

Duncan’s lamp features illustrated scenes from the life of the Buddha.

Duncan said “Vesak lanterns are very popular in Buddhist countries such as Sri Lanka and Thailand – so I thought it would be nice to try making one, however, I didn’t realise how much work it would require – in fact it took 10 months to complete! After much hard work I am pleased with the final result – I hope it serves the group at Vesak for many years to come”.

To give and be generous are attributes of Mine; well is it with him that adorneth himself with My virtues.
~Baha’u’llah

O humankind! We created you all out of a male and a female,
and made you into nations and tribes
that you might come to know each other.
~ Quran 49:13

Let thoughts of infinite love pervade the whole world – above, below and around – without any obstruction, without any hatred, without any enmity.
~Buddhist Metta Sutta